Wolf by Wolf, a new young adult novel by Ryan Graudin, is an adventure packed tale that blends gritty historical fiction with fascinating elements of science fiction and fantasy.

Seventeen year old Yael, a Jewish prisoner in a concentration camp, was chosen at six-years-old to undergo a series of painful and life altering experiments at the hands of Nazi doctors. Told that her life has been spared, Yael watches as the experiments change her appearance, taking away all vestiges of her Jewish heritage. With this painful transition, however, comes a great power—Yael can skin-shift, changing her appearance to match that of other women.

After the victory of the Axis Powers, Yael enters a life of fear and solitude, skin-shifting as a means of survival. She covers the Jewish numbers on her arm with new tattoos, five wolves, one for each of the five deceased people whose memory drives her to enact vengeance upon Hitler. 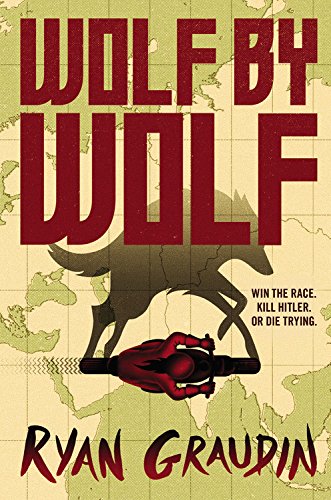 Yael has practiced one particular persona the most—that of Adele Wolfe, the previous year’s winner of the Axis Tour, a hugely popular motorcycle race which commemorates the victory of the Third Reich. The winner of the Axis Tour receives riches and fame, but more importantly, and invitation to the Victor’s ball, where Hitler himself will be present.

If Yael wins the race, she’ll have the perfect opportunity to kill Hitler, getting her revenge and showing the world that the victims of the war will not be forgotten.

Grisly details of war and beautiful descriptions of hope create a world that readers will become immersed in, and Yael is a complex girl who struggles with her self identity while having to unearth the true intentions of the people closest to her. Though this book has been compared to The Hunger Games, it also has a distinct V For Vendetta vibe, showing us a weakened prisoner becoming strong both mentally and physically, with plenty of opportunity for the reader to decide if what Yael does to seek vengeance is moral, immoral, or somewhere in between.

With heart pumping action scenes and the ever present danger of Yael’s true identity being discovered, readers will find themselves turning pages long into the night. Perhaps the only disappointing aspect of the book was the way in which Yael reaches her opportunity to attend the Victor’s ball, which some readers may find undermines the intelligence, strength, and capability she shows throughout the book. Her feelings towards her romantic interest seem forced at times, and readers seeking out a competent protagonist may find themselves scratching their heads at a particular mistake she makes towards the end of the story.

Even so, the book delivers a satisfactory ending, and can be seen as either a stand alone novel or a hint at a second installment. Wolf by Wolf was a unique book with unexpected depth, carefully crafted alternate history, and a dynamic cast of characters.

A great read for fans of historical fiction, science fiction, and all things in between.

With the winter holidays having come and gone, many people may have found brand new drones waiting for them as a gift. Though no precise numbers can be given as to how many drones have been sold in 2015, it’s been estimated that at least one million drones were purchased by consumers this year.

New drone hobbyists need to be aware of laws and regulations regarding use of their drones. Irresponsible drone usage can interfere with government aircraft and with first responders during an emergency. For instance, there are reports of firemen having to shoot a hobby drone out of the way with a hose while taking care of a fire.

If you live in the United States, and you fly a drone that weighs more than half a pound, you’re required to register your drone. The process is simple and currently only costs $5 USD. You can check out the FAA’s website for more information.

Not registering your drone or improperly using a registered drone can have serious consequences. Besides interfering with emergency responders, you can face serious fines or even jail time, and drones clubs have already been shut down over their refusal to follow laws.

Make sure you have your new technology properly registered, labeled, and use it in accordance to local laws. If you use your drone for hobby flying, make sure the area you fly it in isn’t a ‘no fly’ zone. If you’re a cosplayer who is using a drone as part of your costume, ask permission from the convention center to bring your drone inside. Even if you’re hired to photograph an event or record it using your drone, it’s best to be courteous and ask the owner of the property if they’ll allow you to use your drone. Remember to take all aspects of your environment into consideration. For example, using a drone at a horse show may frighten horses and ruin the event for handlers and spectators.

Because drones are fairly new technology to the public, some people may simply not like drones and would prefer the drone isn’t at their event. Be understanding of their view and respect their desire to not have the drone in their space.

No matter what you’re using your new drone for, the best way to begin as an independent drone pilot is to start off on the right foot by following the rules and respecting the airspace of other people.

Of course, don’t forget to also have fun, be inventive, and see where your new drone can take you!